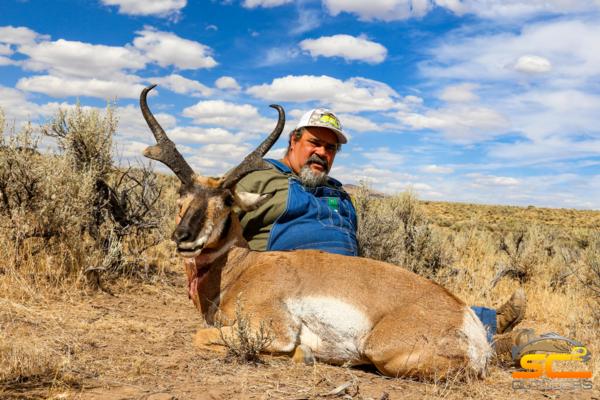 Two For Two In Lassen Zone 4

September 3rd found us back in the Lassen Unit for our 2nd Pronghorn Antelope Hunt in 2016, after putting a great 87” B&C buck on the ground during the Period 1 hunt we were once again looking for a goat worthy of the wait for the coveted tag.  This time our Hunter Dane B. had taken 45 years to draw the tag.  He too had maximum points entering the 2016 California Big Game Draw, this time instead of the annual “unsuccessful notice” he had his Congratulations! “SUCCESSFUL” Hunt 742 – Zone 4 – Lassen Period 2 letter, 1 of 45.

We had a very nice buck located in a spot that we hadn’t ran into many others while scouting, so our confidence was high for opening morning.  It was a huge kick in the gut to find that we had a lot of company in the general area.  In fact, as the sun rose in the east I was in complete dismay when we were not locating any antelope in their usual haunts.  I knew something was wrong and then in my binoculars I glassed the cause, there tucked in the junipers was a hunting camp.  There was nothing wrong with it, perfectly legal, just strategically placed in the poorest possible place for the antelope that had called this valley their home.

We were within a couple of miles of other bucks we had located in our scouting sessions, but here too we ran into numerous other tag holders.  We were able to sneak into one of the hidie holes, undetected by other hunters, we located a nice medium buck but not the buck for us, watched him as he bedded under a lone juniper.  It was entirely too congested in the area for us, like the antelope we were scattering.  Confident that if necessary we could come back in a few days and locate one of the big goats that we had located during the pre-season, by then some hunters would be tagged out and there should be less pressure.

Time to make an adjustment.  No worries, it’s a long season and a giant zone with other spots to check, different bucks to look for and leads to investigate.  We were going to “Plan B”.

A Good Lead and A Little Luck

While contemplating our next move, I picked up the phone and talked with a friend who provided me with a lead on a couple of bucks that he thought might be in the caliber we were after.  Shelley and I have spent a lot of time in the unit but we were now headed to a completely new area thanks to his lead.

It was huge country, it was void of other hunters and it definitely could hold a trophy pronghorn.  It was early afternoon and the heat waves made it impossible to glass the distances we normally attempt.  We had decided to be back here at first light where we could have the advantage of optimal glassing conditions.

We had chosen to move once again to hunt the evening when lady luck shined her beautiful face upon us.  In the sage rollers above the flats I just happened to catch a glimpse of the white bellies of four pronghorn doe, and just to the left of them stood this great buck.

Using the contour of the land, we made a short stalk to get into range for Dane to take the shot.  Dane waited a long time to draw the tag, he was able to make the most of the opportunity when it presented itself and was able to punch his tag on this gross green scored 82”, gross green net 80” beauty of a California Pronghorn.  This buck has a 19” inside spread super impressive standing in the sage.

Shelley and I are very lucky to get to participate in several great hunts annually.  Our success and that of our clients are dependant on numerous factors, including serious scouting, ground work, map work, our family and most importantly our great network of friends, whom are willing to provide their priceless knowledge, as exhibited in this hunt.  The lead from one of our friends put us in the area directly contributing to our sucess on a great goat.  We hope we can return the favor in the future.