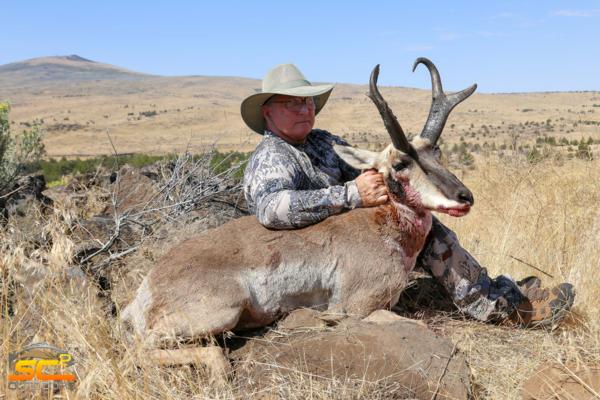 A 40 Year Endeavor To Draw A California Pronghorn Tag

It took Mike the full 15 years of the preference point system and 25 years prior to that to finally get his first California Pronghorn draw tag.  These hunts are quickly becoming a once in a lifetime opportunities California hunters.  Unless California adopts something similar to the Nevada draw it’s only going to get worse.

In Search of a B&C Pronghorn

The downside is the perilous draw odds, the upside is the quality of the hunt and that every unit has the potential for a Boone & Crockett Pronghorn.  Mike drew Hunt Code 740 Lassen Zone 4 Period 1, a great unit to search for a “Boone’r Goat”.  That was our goal, we were committed and Mike was dedicated to the task.  No worries, we love to hunt for big pronghorns.

Preseason scouting filled most of August, we found numerous bucks and then we found him.  It was clear to us that the only reason we’d look further was to have a backup plan, in the event someone else would be on him as well.  We found several other bucks and some real dandies but we kept checking back on him, hoping that he would go unnoticed by others.  As opening day approached we had completed our ground work, now it was just a matter of time.

We had already invested numerous hours, logged countless dusty miles and spent scorching hot days behind the glass prior to the hunt.  As the darkness of night gave way to civil twilight, my nervous anticipation grew stronger as the desert came to light with the dawn of opening day.

From this vary location the previous evening less than 9 hours earlier watched him from 1,000 yards away feeding with 18 – 20 does, as darkness fell.  The crazy thing is that we are weeks ahead of the rut and this buck was not in a bachlor group but instead has been the solo man with the same 18 -20 does, guess he just likes to hang with the ladies.

At the current moment he was nowhere to be found, we had several bucks moving around the basin but not him.  An hour into the morning we climbed up the east face glassing east looking for him, it took us another hour to get him located as he feed through the juniper and sage.  He was now a little over 1700 yards away.  Time to close the distance, not a simply task considering the numerous eyes he had around him.

We crossed over the valley and gained elevation.  We soon found ourselves within 450 of the group.  It took us a bit to pick through the heard and find him, a little game of chess found us ready for the shot at 309 yards only to have him lay down behind a burnt mahogany offering no shot.  It was now a waiting game.

It took about 45 minutes before he stood and offered Mike a shot.  I’m not sure if it was the mule deer bucks closing in or that the does and fawns he was accompanying had moved up the hill out of his comfort range.  It was irrelevant he was up and broadside, at the crack of the rifle, we had that familiar “whop”.  It took an additional follow up before Mike had his B&C goat.

Crazy 40 years of applying, tagged out 6 hours into opening morning, but it was a great thing.  We had just taken a B&C California Pronghorn out of Zone 4 Lassen Period 1 on public land, with a Green Score of 87” and a Net Green Score of 84 6/8”.

We only get credit for finding the buck and Mike gets the credit for making the shot, the real credit for those heavy black, flared prongs and heavy curl over with ivory tips goes to this old buck, himself.  He knew where to hide, where to feed, where to water and how to survive in the frigid winters and scorching summer heat in the high desert of Northeastern California.

A grand old speed goat whom will live in our memories forever.  We are grateful to be able to hunt such a magnificent animal in beautiful, tough and wild country. We can’t wait for Period 2.